$743 Billion it is estimated, to fix America's water system.

(CNN)Virginia Tech engineering Professor Marc Edwards watched as water flowed from a garden hose in Enterprise, Louisiana. As he moved a jar to catch a sample, the color changed from clear to brown.

"When mine comes out, it comes out black," Enterprise resident John Tiser said as he watched Edwards work.
Tiser, Enterprise's newly appointed water board president, was giving Edwards a tour around this rural community in central Louisiana, where residents have struggled with water problems. He says his wife drives 20 miles each direction to do laundry in a town with clear water.
Concerned about the potential health effects for his family, including his two daughters, he ran for a seat on the local water board.
What drives him, Tiser said, is "being sure that they're not consuming anything that 20 years from now is going to wind up hurting them."
Years of water system neglect means that the 250-or-so residents there are left with pipes that leak more than 70% of their water into the ground, Tiser said -- all because they can't afford to fix them.
"We're basically putting Band-Aids when we need to go to the ER. That's where we're at," he said. 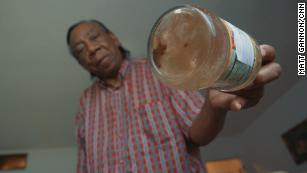 For 10 years, a chemical not EPA approved was in their drinking water
It's what Edwards calls America's "dirty little secret." He explains it this way: That often times towns like Enterprise are stuck with aging infrastructure that they can't fix, leaving few options for them to deal with complaints about dirty or contaminated water.
The US Environmental Protection Agency says the nation needs $743 billion to fix America's water system.
In his wife's minivan, complete with acid stains on the carpet, Edwards says he makes long drives to small towns that are hurt by dwindling populations, and slowly being forgotten. "It's the perfect vehicle. I couldn't take a rental car, because I can't explain why there's acid burns in the seats of those. But that van's seen a lot of bad water," he said.
Edwards has spent nearly two decades testing water and challenging federal, state, and local governments on water quality. His work helped to reveal high levels of lead in the water in Flint, Michigan.
Edwards says Virginia Tech, where he is a professor, supports his work, as long as he can afford to pay for his travel, which he has done for years. 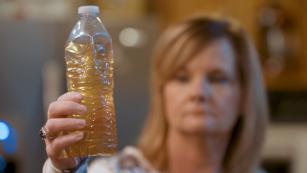 He has since received an EPA grant of nearly $2 million to seek out water issues in towns like Enterprise.
The EPA and the federal government do offer grants and loans to towns. But, states can't afford to swoop into every town and fix the aging pipes in homes, buildings and structures. In many cases, that falls to property owners.
"I'm not blaming anyone for what happened," says Edwards. "We put these communities in an impossible situation. We say, 'Here are the federal laws. You figure out how to meet them,' and when they can't, no one's there to help them."

In 2017, Edwards and a team of scientific and academic researchers tested the water in Enterprise and found bacteria, lead and other contaminants that exceeded EPA limits.
Resident Jodie Vinson ticks off the repairs that have cost her family over $10,000 due to corrosive water. "Just in the last four years that I've been here, we've been through three hot water heaters," she said. "We have gotten all new plumbing in the house. Then as far as faucets, we've been through, I guess, two in the back bathroom and two in the front. So four faucets. And they're already in bad shape." 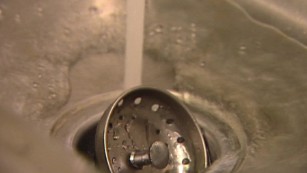 EPA gives $1.9 million to researcher to find lead in water
It's an expensive problem, and each week she says she buys about 10 cases of bottled water.
And, for the past year and a half, Vinson says, she and her family have been routinely sick, as they battle their tap water. Vinson says doctors told her she has H. pylori bacteria, and her son, Blake, had bouts of coughing, bronchitis and respiratory infections. Last year, she was hospitalized with bacterial meningitis. She blames the water. "I cannot say that the water made us sick but I can say I have proof that it causes what we have," she said. "So we don't know and we never know and you're afraid to drink it and you're afraid to open your mouth in the shower."
Vinson's water provider, Enterprise Waterworks Inc. sends out periodic "boil water notices" warning customers of things like "questionable microbiological quality." It's something everyone is more than aware of.
When CNN was in Enterprise to meet with Vinson, her home was under a boil water advisory. However, the US Centers for Disease Control and Prevention warns that boiling water with lead in it, can actually make the level of lead higher. Medical experts warn there is no safe level of lead in the body.
"...so if you boil the water to get the bacteria out then you're making the lead content worse and more dangerous in the water," said Vinson. "So you really don't know what to do." 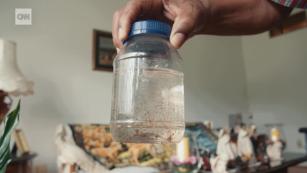 Lawsuits filed over drinking water in South Carolina after CNN report
Louisiana alone would need about $10 billion to fix its water system. That's money it does not have, the office of Gov. John Bel Edwards told CNN.
He's put together a committee to help Enterprise and nine other communities in the state deemed the most "distressed."
"Systems are going to continue to age and degrade," the governor told CNN affiliate KNOE in November 2017. "But we are more constrained than we would like to be and therefore cannot invest in all these improvements like we'd like to."
The American Society of Civil Engineers has given the United States a grade of D when it comes to drinking water infrastructure. While the majority of the country receives safe drinking water, the EPA says thousands of systems in rural America are deemed "serious" violators of federal law because they don't meet federal standards.

The EPA told CNN that more than 300 million Americans depend on 50,000 community water systems across the country for safe, reliable water every day. Over 92% of the population supplied by community water systems receives drinking water that meets all health-based standards all of the time.
"The United States has world-class drinking water standards for more than 90 contaminants, including microorganisms, disinfectants, disinfection byproducts, inorganic and organic chemicals, and radionuclides-providing Americans safe and healthy water to drink," the EPA said.
But, a 2018 EPA report found that nationwide, nearly one-third of the nation's public water systems had at least one violation of the Safe Drinking Water Act. Those systems serve more than 87 million Americans.
In 2016, the EPA reported nearly 8% had violations of health-based standards. About 3% of public water systems were serious violators, typically with multiple violations over a sustained period.
But, multiple government reports over the years show that the water quality issue may possibly be much worse, especially in rural America, because local communities may not always be accurately reporting their data.
In a May EPA report, the agency's inspector general said, "This situation can lead to conditions where the EPA and public may not know if water arriving at taps meets national drinking water standards."
"Drinking water is a fundamental human right," said Rep. Dan Kildee, a Democrat from Flint who has been dealing with the fallout of a town reeling from lead poisoning since 2014. "It's something that's necessary to sustain human life, and so it's hard to think of a more important priority for every level of government."
Kildee says he often hears from other members of Congress who suspect water issues in their towns, but can't get help from the local leadership. And, he says, the federal government just isn't motivated to take on the true cost to fix the problem.
The EPA estimates $132.3 billion is needed to repair small water systems in America over the next 20 years. But, in 2017, only $805.7 million was allocated to these systems -- about 12% of the amount needed.
"They don't want to talk about it. Because, they understand that there's a consequence that comes with it," Kildee said, referencing the financial consequence of dealing with failing infrastructure. "I think a lot of people in public office just want to kick the can down the road until they're not around anymore.
"I don't think there's any one party that can be held accountable for it."

'We're third-world when it comes to drinking water'

"If we don't fix this problem, a whole lot of people get hurt when they're being told there's nothing to worry about," said Virginia Tech's Edward. "And I can't live in a world where that's allowed to happen. ... The reality is, yeah we're third-world when it comes to drinking water in these poorer communities. That's the reality."
"There's never a ribbon cutting ceremony when you fix an underground, dirty water pipe, and that's why we typically invest more in bridges and airports and other things that can be a showcase," said Edwards. "But the danger from these pipes is real."
Tiser, the Enterprise water board president, says all levels of government have failed by taking no real action taken over the years to fix the problems. "We get the aging infrastructure and we're occurring debt every month just to try to stay afloat," he said, noting that when he became a member of the water board, "I had no idea that we were half a million dollars in debt."
As the cost goes up, so do the water bills, placing the financial burden on the shoulders of 200 households, "and we don't have clean water on top of that," he added.
Because Enterprise is in debt, the Louisiana governor's office says the town is not eligible to apply for the grants to communities to improve bad water systems.
"It boils my blood to know that somebody can sit up there and say 'They just have to deal with it,' " said Tiser. "The only way they're gonna get any help is if the water tower blows over." He went on to say, "This is supposedly God's country we are our brother's keepers right? We're all neighbors we all know each other it's the human, right thing to do."